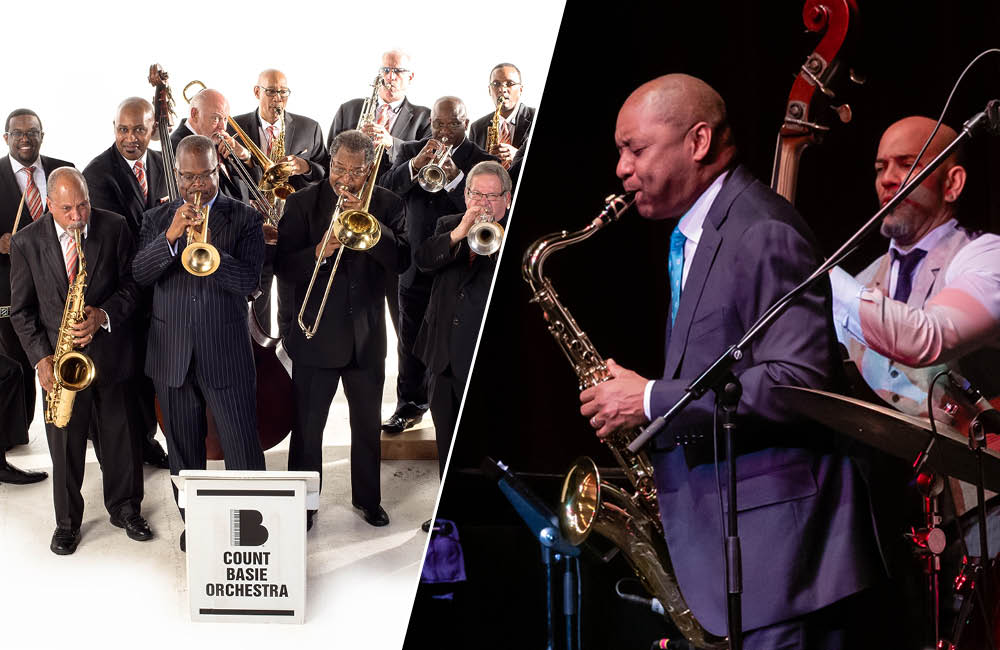 Play It With Count Basie, and Branford Marsalis, at The Soraya

The timeless swing of the Count Basie Orchestra, the pure vocals of Lizz Wright, and the vibrant interplay of the Branford Marsalis Quartet represent three of the most important musical dialects in today’s national jazz conversation. With these quality offerings in the new fall season (Branford Marsalis Quartet on Thursday, October 28, and the Basie Band’s “Music of Ella Fitzgerald” featuring Lizz Wright on Wednesday, Nov. 17), The Soraya puts its chips on jazz, and lets it ride.

In 2019, the Branford Marsalis Quartet played onstage in the intimate Jazz Club setting and quickly became a Soraya favorite. Quite simply, it’s one of the great working jazz bands of our time. Begun in 1986, it has remained intact, with minor personnel changes. Along with the tenor and soprano saxophones of Marsalis, the group boasts pianist Joey Calderazzo, bassist Eric Revis, and drummer Justin Faulkner. Highwire interplay is a hallmark of the band, which redesigns standard material to its own ends. Don’t look for sixteen-chorus solos from this unit. “We don’t elevate improvisation over everything else in the music,” Marsalis says, speaking by cellphone on the road. “That’s like engaging in musical small talk all night long. We’re more interested in form and engagement.”

Marsalis contributes the bulk of the challenging material, like his haunting “Life Floating Through the Water Flowers.” But other pieces—like the intense “Dance of the Evil Toys” by Revis, and Calderazzo’s exotic Cianna”—come from within the band. Adding occasional well-chosen gems, like “Snake Hip Waltz” by the fascinating jazz composer Andrew Hill (1931-2007), give the Quartet one of the most potent books in contemporary jazz. 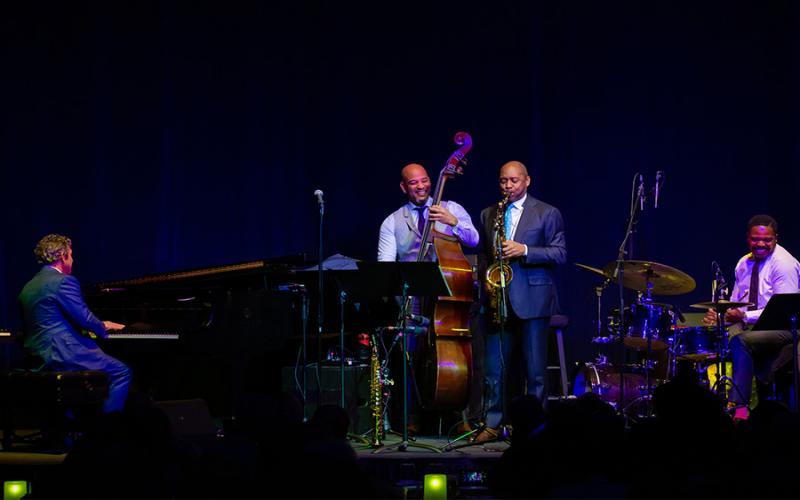 Marsalis’s musical scope isn’t limited to jazz. He’s a well-studied composer with a firm grounding in European concert music and opera. His study allows him to take on soundtrack and scoring projects like “Ma Rainey’s Black Bottom” (2020), and the recent “Tulsa Burning: The 1921 Race Massacre” special on the History Channel. (His score has earned a Grammy nomination.) That musical passion surfaces in the Quartet as well: the Marsalis tenor saxophone has grown into a majestic sound, capable of an array of colors and timbres. Nothing less than operatic richness comes from that horn.

The Count Basie Orchestra had been scheduled for the 2020 season, and its Soraya return is hotly anticipated. The Basie band has not just outlived the big band era, it has thrived. This is no ghost band; its last album, “All About That Basie” (Concord Jazz 2018), was Grammy-nominated.  And no other contemporary jazz orchestra administers the 4/4 Kansas City swing like the Basie-ites. As it was under the leadership of William ‘Count’ Basie (1904-1984), the Orchestra is Mecca for hopeful jazz arrangers everywhere.

Basie himself was a great musical editor. Neal Hefti’s “Lil Darlin’” was submitted as a medium bounce. Basie wisely saw it as a ballad and turned the number into a jazz standard. “A lot of writers send us charts,” says trumpeter and leader Scotty Barnhart. “But not everyone knows how to write for us. The band can tell within the first six or eight bars if a tune will work. Once we agree on a submission, we may play with the dynamics, designate a crescendo, or phrase ahead or behind the beat—all to put the Basie stamp on it.”

The glorious Basie history has given jazz countless music milestones: Lester Young’s float-like-a-butterfly-sting-like-a-bee tenor sax solos, the Puckish trumpet of Harry ‘Sweets’ Edison, the juggernaut ensemble swing of “Dickie’s Dream,” Joe Williams’ urbane blues singing, and the iconic Basie-led “All-American Rhythm Section.” Though the personnel has changed over the years, those values can be heard in the present-day Count Basie Orchestra.

Lizz Wright has some history with the Basie band—at Chicago’s Symphony Center, the Apollo Theatre, and Jazz Aspen. The Soraya brings them together in their most intensive Ella Fitzgerald program to date. When their schedules permitted, Ella performed with the Basie band, and to great acclaim. She was the last word in swinging vocal jazz, and she used the foursquare beat of the band as her own private playground for her rhythmic and scatted maneuvers. The “Ella and Basie” album (Verve 1963) has long been considered a classic.

Ella Fitzgerald is a prime source of inspiration for gospel rooted Lizz Wright. “She’s a very active muse in my life,” says Wright. “There are times when I immerse myself in her music, because she epitomizes what I strive for. Ella was the musicians’ singer; she was fully engaged with the songs, the band, and the audience.”

Wright’s dark, rich voice luxuriates in slow tempos. She can fill the air with her spreading contralto like few of her contemporaries. “Ella was a great communicator,” says Wright. “She made sure she told the song’s story to the audience. But she could have fun with a lyric and find humor in it. I love that she walked both sides of the street like that.”

The COVID-19 shutdown was especially hard on SoCal jazz venues. As performing spots closed, the quarantine also interrupted The Soraya’s ascendance as an important jazz destination. The promise of the upcoming Spring Jazz Festival (mainstage concerts with Wynton Marsalis and the Lincoln Center Jazz Orchestra and Gregory Porter; and Jazz Club concerts with Gerald Clayton, Gretchen Parlato and Harold Lopez-Nussa) signals that The Soraya is swinging again in full force.

Kirk Silsbee is a veteran Los Angeles journalist who writes about jazz and culture. His work has uncovered some of the forgotten histories of jazz musicians and artists, and their contributions--particularly in Southern California.  His work has been published in Downbeat, Jazz Times, Jazziz, the Playboy Jazz Festival program, the Los Angeles Times, the L.A. Daily News, Jewish Journal, Los Angeles, L.A. Style, Arroyo Monthly, the L.A. Weekly, L.A. CityBeat. New Times L.A., the L.A. Reader, and in scores of liner note essays for record and CD releases. He's a frequent on-camera presence in arts documentaries and TV programs, and his ongoing panels for the L.A. Jazz Institute's biannual big band festivals remain popular with audiences