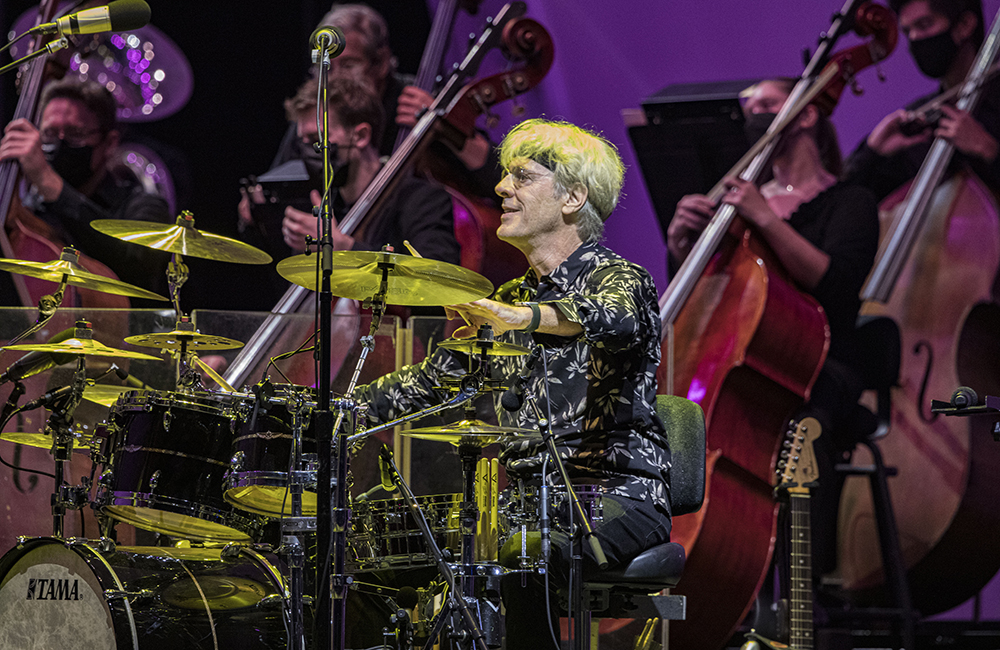 Sonic Boom: The Police, Reimagined, at The Soraya

No band electrified audiences in the 1970s and ‘80s like The Police. Omnipresent on the airwaves, they had arenas pulsing across the globe. Punk energy unpinned by jazz figures, reggae rhythms and symphonic aspirations made The Police the defining New Wave band. Drummer Stewart Copeland was in the driver’s seat—his wild blonde hair swinging as he bashed. He taps into that exhilaration with “Police Deranged for Orchestra: Music of The Police,” at The Soraya on Thursday, November 4. From his spectacular drum set, Copeland delivers expansive new arrangements of the three-member super group's music, further amped by the Re-Collective Orchestra sharing The Soraya stage. Known for hi-hat precision, Copeland says, “We’re going to get this orchestra thumping.”

Copeland’s post-Police career earned him applause and critical praise conducting his extensive film, television, and stage music with orchestras. Copeland’s compositional heroes include Igor Stravinsky, Maurice Ravel, John Williams, and Aaron Copland. “I love the moderns,” he says. “I learned how they’d write for different instrumental combinations, and their possibilities.” He also had a ground-level classroom— “the flinty-eyed studio musicians.” Copeland says dryly. “They’ve played all of the great composers, and they let you know what they think of your music. That’s my grad school.”  After a 2007 Police reunion tour, he saw that the public still craved the tunes. “When I performed my film music with the orchestras,” says Copeland, “we’d throw in a Police number or two. I witnessed the emotional power those songs unleashed--all these years later.”

Convinced that the recordings contained hidden layers yet undiscovered, Copeland tore into the original tapes. “I know every drum fill, pick-up, and accent on those songs. But I found some very beautiful and intricate guitar and bass parts underneath. As soon as I opened that door, there were many cool possibilities.”

Copeland detonates his so-called “derangements” with the help of the three-time Grammy winner Cheche Alara who’ll conduct the cleverly named Re-Collective Orchestra.  The choice of the Re-Collective Orchestra for the Soraya show is a bold statement. Begun in 2018 by composer Matt Jones and violinist Stephanie Matthews, it’s a collective orchestra of black, classically trained musicians who perform and promote the music of neglected black composers. "Our players come from many different music backgrounds," says Matthews, speaking by phone. “We challenge preconceptions of what an orchestra can look and sound like.”

“This is a raging, rocking orchestra,” Copeland says, noting that some of SoCal’s best musicians will also join him and the orchestra on stage. “We’ve got guitarist Randy Anderson—on loan from Paul McCartney—and the great Cameroonian bassist Armand Sabal-Lecco.  And I’ve got three soul sister singers—Amy Keys, Carmel Helene and Ashley Tamar. They’re my Ronettes, my Supremes, my Shangri-Las.”

“My priority,” conductor Alara says, “is to make sure that Stewart can express himself exactly the way he wants to. It’s the delicate balance of leading the orchestra but picking up on what he needs.” A musical director, composer, arranger, and conductor who has worked with Barbra Streisand, Christina Aguilera, Destiny’s Child, and Alejandro Sanz, among others, Alara carries The Police imprint. “One thing everyone in high school could agree on was we all worshipped the music of The Police,” he recalls of his native Buenos Aires in the 1980s. “It had the rebellious spirit, and we danced to it. Only later did I understand how deep and profound the compositions are: they’re quite elaborate in their conception and craft.”

“The first meeting in any collaborative creative endeavor is like a blind date,” Alara continues. “In two minutes, you know if it will be great, or a grind. In the first ten seconds of meeting Stewart, I knew it was going to be wonderful.” Given Alara’s thirty-year fixation on The Police, was this collaboration destiny? “I’ve thought about that,” Alara says. “I’m not sure how we connected, and I’m not sure I want to know, but I’m very grateful for this opportunity.” Copeland puts it this way: “Cheche and I have the same mission—to burn down the house.”

Kirk Silsbee is a veteran Los Angeles journalist who writes about jazz and culture. His work has uncovered some of the forgotten histories of jazz musicians and artists, and their contributions--particularly in Southern California.  His work has been published in Downbeat, Jazz Times, Jazziz, the Playboy Jazz Festival program, the Los Angeles Times, the L.A. Daily News, Jewish Journal, Los Angeles, L.A. Style, Arroyo Monthly, the L.A. Weekly, L.A. CityBeat. New Times L.A., the L.A. Reader, and in scores of liner note essays for record and CD releases. He's a frequent on-camera presence in arts documentaries and TV programs, and his ongoing panels for the L.A. Jazz Institute's biannual big band festivals remain popular with audiences