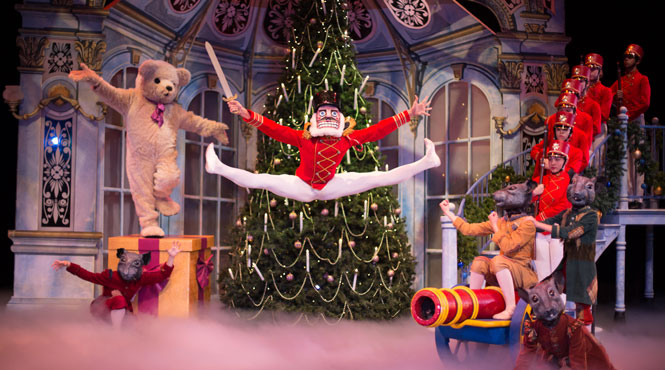 "Aspen Santa Fe Ballet is joined by Encino’s Los Angeles Youth Ballet plus a cohort of dancers from around the world for its staging of Tchaikovsky’s holiday tale."

The Christmas holidays mean ‘The Nutcracker’ ballet will be performed all over Southern California: Find one to see

"Nearly 100 performers, including more than 70 children from the Los Angeles Youth Ballet and students from USC Glorya Kaufman School of Dance, will appear in this production. The cast will be joined by Joffrey Ballet company members Jeraldine Mendoza and Dylan Gutierrez for the middle of the three performances."

Stunners star in Aspen Santa Fe ‘Nutcracker’ at The Soraya

"Some go for sugar plums; others toy soldiers. Some like a candyland; others a carousel. It’s all part of the variegated fun that is The Nutcracker ballet, a solid version of which will spool in three shows this weekend at The Soraya. It is the nearly 25-year old rendering by Aspen Santa Fe Ballet that is making its Southern California debut at the Soraya’s splendid house."

"ASFB's dancers are unmatched in their athleticism and technique, thanks to a rigorous, year-round schedule of training and touring, including engagements at The Joyce Theater, Jacob's Pillow Dance Festival, and the Kennedy Center. Their production of The Nutcracker is a signature piece, now in its 23rd season, coming to Los Angeles for the first time in December."

A tough nut to crack

"While the Aspen Santa Fe Ballet keeps its "Nutcracker" in the Victorian era, the acclaimed troupe integrates traditional Spanish and Chinese Dance (along with Los Angeles Youth Ballet's young dancers) into the Tchaikovsky classic when the troupe makes its local debut at The Soraya."

"With Tchaikovsky's original music, this storybook production, choreographed by ASFB executive director Jean-Phillippe Malaty and artistic director Tom Mossbrucker, is set in the Victorian era, beginning with the resplendent party and concluding with the fantastical scenes in the second act centered around a bright and colorful carousel."

Local Students in “The Nutcracker” at The Soraya

"The production is set in the Victorian era, beginning with the resplendent party and concluding with the fantastical scenes in the second act centered around a bright and colorful carousel."