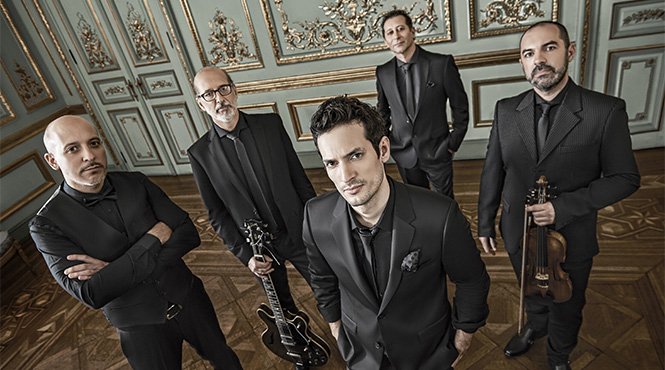 When Astor Piazzolla, Argentina’s paramount composer and bandoneon player, introduced his revolutionary quintet of the 1960s, tango adherents didn’t embrace his innovation. Fistfights, even death threats, were not uncommon. The tango maestro’s band was once doused with gasoline and barely escaped immolation. Piazzolla (1921-1992), who challenged tango orthodoxy, took the cultural emblem of Argentina into the modern age kicking and screaming.

Quinteto Astor Piazzolla, the latest iteration of the composer’s working quintet for whom he created the bulk of his compositions, brings this legacy to The Soraya on Thursday, October 3. It’s an opportunity to experience the distinctive musical canon in The Soraya’s fine acoustics.

Tango was born in the slums and brothels of Buenos Aires; the somber and melancholy music was first played by trios—flute, violin, and piano. With the addition of bandoneon (button accordion), tango ensembles added a strident, slightly discordant voice. The physicality on view in the dance—the woman’s leg wrapping around the man’s waist, his forceful dips—signified sexual entanglement, ritual connection, and dominance. The original dirty dancing became the sensation of pre-World War I Paris, and spread quickly to the continent. 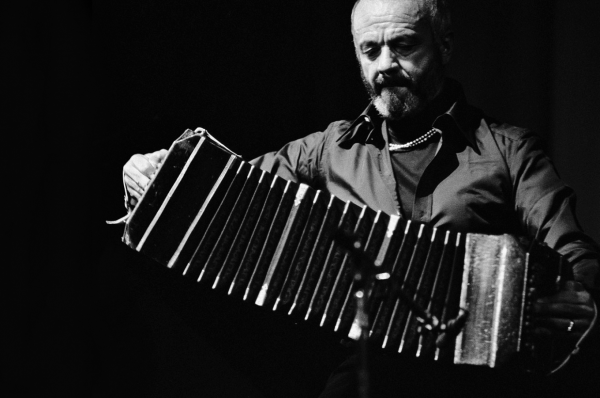 Born in New York City, Piazzolla grew up in the tough Little Italy neighborhood. The music of the city, through jazz and Gershwin, never left him. Piazzolla was just in his teens when he picked up a bandoneon. At sixteen, he relocated to his father's homeland, Argentina.

In 1946, Piazzolla formed his first group, incorporating jazz, Italian opera, and percussion, and in 1955, he introduced his first Nuevo Tango octet. It was greeted with outrage but, as Piazzolla later observed: “That’s how one tango was dying and another was being born.”

“He changed the rhythm to three-plus-three-plus-two, rather than the traditional two-by-two,” said Dario Vaccaro, the once famed Tango dancer who now manages the Quinteto. “He faced a lot of resistance—especially when he introduced electric guitar to the ensemble.” Speaking by phone from New York, Vaccaro labeled Piazzolla’s 1960s Quintet as “game-changing.”

Similar to Charles Mingus in jazz, Piazzolla needed a band that was a vital, breathing entity. He employed renowned instrumentalists, like pianist Jaime Gosis and Dante Amicarelli, and bassist Kicho Diaz. “Piazzolla listened closely to all his musicians,” Vaccaro said. “He challenged them to rise to the occasion." Piazzolla knew that a written score is a springboard for something greater in the performance. Vaccaro said: "It’s always been a balance between what’s in the score and what’s not in the score.”

Since “Tango Argentina” on Broadway in 1985, tango shows lit up major cities, and tango classes were packed. Piazzolla rode the popularity and released over 40 albums, and was responsible for introducing to young audiences the music’s taut emotion, galloping rondos, violently careening sections, and tender resolutions.

The prolific Piazzolla composed every day, as regularly as a nine-to-five worker. “We know of 2,500 pieces,” said Vaccaro, “and we keep finding more.” The legacy is enormous and growing. The music that began in whorehouses found a place in concert halls, motion picture scores, and TV soundtracks. Piazzolla himself recorded over 40 albums, and if anyone is responsible for the extended life of the tango, it is he.

“The resistance and anger that Piazzolla faced years ago is mostly all gone now,” Vaccaro said. “People everywhere love his music. He’s Argentina’s composer now. Nobody can deny that.”