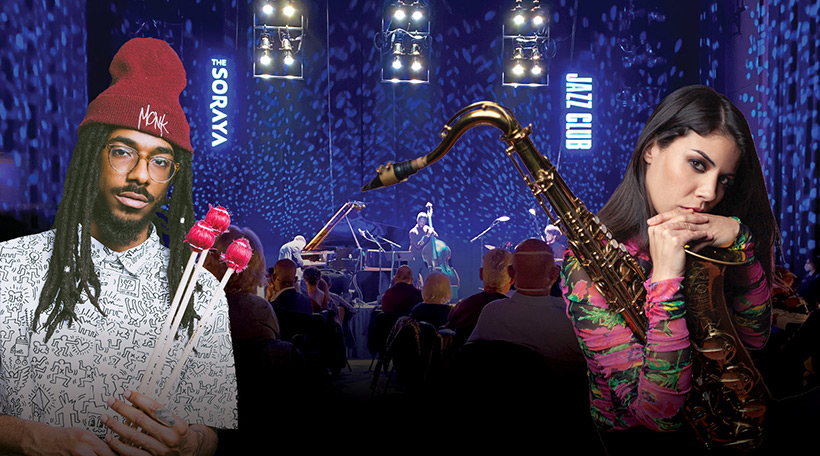 The Soraya transforms its stage for a second time, bringing Jazz Club to San Fernando Valley

The flow of energy between audience and performer is an important element of any live show. Its significance is amplified in jazz due to the nature of improvisation, which consistently pushes performers to explore uncharted territory. With each solo, audiences get to witness a moment that has never been created before. Through their applause they send the energy of gratitude back to the stage, a show of reciprocity for an experience that will never occur again.

In this year’s Jazz at Naz Festival, The Soraya will again transform its stage into an intimate Jazz Club atmosphere, creating the perfect setting for audiences and performers to experience this powerful energy exchange up close and personal.

Tenor saxophonist, Melissa Aldana and her tight-knit quartet are set to open this two-day affair. Initially scheduled to make her Northridge debut in 2020, her performance was delayed due to the start of the global lockdown. Like many, Aldana was deeply impacted by a profound sense of loss and uncertainty as the pandemic began to unfold. After arriving at her self-described lowest point, she turned inward and channeled the whirlwind of emotions into the music that became her most recent triumphant recording, “12 Stars” on Blue Note Records.

Originally from Santiago, Chile, music has always been a part of the talented saxophonist’s life.  Aldana’s father, also a saxophonist, introduced her to the music of Charlie Parker and Cannonball Adderley at an early age.  She was later drawn to the immense catalogue of Sonny Rollins, who eventually became her mentor. Her talent, determination and skill led to international performance requests, a Grammy nomination, and first prize in the highly coveted Thelonious Monk Competition.  Her prowess as a composer has been well documented on her six acclaimed recordings including Vision, which was recognized by NPR as one of the best albums of 2019.

Two days later The Soraya’s Jazz Club will host vibraphonist Joel Ross.  His ensemble will perform music from his most recent recording, “The Parable of The Poet” on Blue Note Records.  This suite was constructed to intentionally skew the lines between improvisation and composition.  As a result, the instrumental voices perpetually rise and crest in a wide-ranging sound palette.  This project also highlights the significance of trust in collaboration. After selecting musicians with whom he felt a deep connection, Ross instructed them to use the melody as a guide and then follow their musical instincts to inform where the music should go next.

Ross represents a generation of emerging leaders from Chicago who are continuing the region’s rich musical lineage. Having settled in New York, he has become one of the most respected and in-demand musicians on the scene – sought after by his contemporaries and veterans alike. Ross has also established himself as a bandleader, garnering critical claim for his previous two releases, both for Blue Note Records. In recent years he has regularly topped DownBeat magazine’s Critics Poll, specifically on his instrument and in the category of Talent Deserving Wider Recognition.